4 Things To Remember As The Aaron Rodgers Saga Rolls On The Packers lost a heartbreaking game on Saturday, and it still stings. A big reason is because I was there. The other reason is because after this season, there are no guarantees that Aaron Rodgers remains Green Bay’s quarterback. With the will-he-or-won’t-he saga continuing, there are four things to remember as we await his decision. More specifically, four quarterbacks who left their long-time team after winning at least one Super Bowl, changing a city and gaining the love of so many. There’s no way to tell if Rodgers will leave, but as fans we have to acknowledge that it is entirely likely he’s played his last game as a Packer.

The most recent quarterback to leave his beloved city, Tom Brady departed New England for the warmth of Tampa Bay after 20 seasons. He won SIX Super Bowls and four MVPs in a Patriots uniform, compiling 324 wins in Foxboro, Massachusetts. Many believed that Tom and Coach Bill Belichick had come to the end of the road in their relationship. Even as loved as Tom Brady was, and as much as he meant to so many in the Northeast, he left for a new city. Peyton Manning is another QB who, as beloved as he was, parted ways with the franchise he meant so much to. In 14 seasons, he led the Colts to two Super Bowls, winning one. In 2017, a statue was erected outside of Lucas Oil Stadium which is often referred to as “The House That Manning Built.” For all his contributions to the city of Indianapolis, Manning remains a legend and admired figure in Indy today. Manning moved on to Denver and brought the Broncos a championship. Joe Montana led the 49ers to four Super Bowls in his time as quarterback in San Francisco. He also took home three MVP awards. In 1991 and 1992, Montana missed most of those seasons due to injury. While filling in, Steve Young showed that he could be the starter. Young didn’t want to be a backup and eventually, Montana requested a trade. As much as the 49ers owed to Montana, it was time to move on. In 1993, Montana signed a three-year deal with the Kansas City Chiefs. Young would go on to win a Super Bowl for the Niners, but you can’t mention the team without acknowledging all of the contributions that Montana gave the city of San Fran as their QB. Finally, there’s the quarterback that we, as Packers fans, are most familiar with. I remember the day Brett Favre announced his retirement. I remember where I was; I cried because a legend was leaving Green Bay. For years, there was the “will he retire or will he be back?” offseason decision. It was time for Aaron Rodgers, who had waited patiently to become the newest quarterback of the Packers, to take over. In his time with the green and gold, Brett went to two Super Bowls and defeated the Patriots, then lost the next year to John Elway and the Broncos. Favre became known as the “Gunslinger” as he was known to break his receivers’ fingers at times. He loved the game and never missed a single start as a Packer.

Favre decided to walk back his decision on retirement and wanted to come back to Green Bay. But the Packers had made the decision to move on to Rodgers. Favre would play one season with the Jets and go on to play two seasons with the Packers’ rival in the NFC North: the Vikings. Many believed he played in Minnesota to “get back” at the Packers for not welcoming him back to the team after his “retirement.” The people of Green Bay loved Brett Favre, and even as he left for New York and Minnesota, what he did for the city of Green Bay will forever live on. 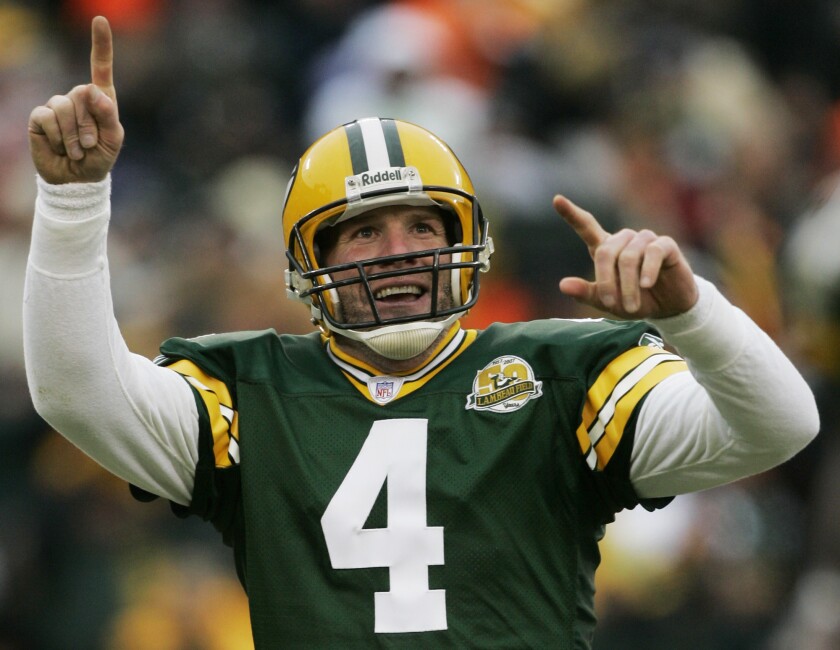 Rodgers: Will He, Or Won’t He?

As I said before, nobody knows what the future holds for Rodgers as the Packers’ quarterback. He says he will make the decision by March. But as fans, we have to be ready for the moment that may come if Rodgers decides to take his talents to another city. Green Bay’s Offensive Coordinator Nathaniel Hackett was just named Head Coach of the Denver Broncos. Speculation on Rodgers playing in Denver will lead the news cycle for the next few days. Either way, the city of Green Bay will certainly miss #12 behind center if he did play his last game in a Packers uniform.