The Green Bay Packers finished the season with the NFC’s best record at 13-3.  When we last graded the Packers at the halfway mark of the regular season, they were 6-2.  Since then, they have gone 7-1 and have established themselves as the favorite in the NFC.  While the defense played a large role in this, the Packers’ offense became the highest scoring offense in the entire NFL.  As we wait for the Packers’ first playoff game in the Divisional Round, we give the Packers’ offense our final regular season grades.

As good as Aaron Rodgers was in the first half of the season, he was even better in the second half.  Rodgers finished the season leading the NFL in touchdowns, completion percentage, interception percentage, passer rating, and QBR.  In 2020, the future Hall of Fame quarterback passed for 4,299 yards, 48 touchdowns, just five interceptions, while completing a career-high 70.7% of his passes.  His 121.5 passer rating is second all-time, behind his own 122.5 record that he set in 2011.

As eye-popping as these numbers are, they mean so much more when taken into historical context.  With his 48 touchdowns, Rodgers became the first quarterback ever to pass for 40 or more touchdowns in three different seasons.  In addition, he joined Peyton Manning as the only two quarterbacks to throw for 45 or more touchdowns in two separate seasons.  When Rodgers’ three rushing touchdowns this season, giving him a total of 51, his touchdown to interception discrepancy was 46, tying Manning for the largest in NFL history.

As the season ended, Aaron Rodgers was honored with his ninth career Pro Bowl selection.  In addition, he was named to the First Team All Pro this year.  All signs are pointing to Rodgers getting his third career MVP Award this year.

The 2020 Packers’ wide receiver season was dominated by Davante Adams.  Adams had, perhaps, the greatest single season of any Packers’ receiver ever.  He finished 2020 with 115 receptions, 18 touchdowns, and 1,374 yards.  His 18 touchdowns and 98.1 yards per game led the NFL.  Additionally, his 115 receptions broke Sterling Sharpe’s team record, and his 18 touchdowns tied Sharpe’s record.  Like Aaron Rodgers, Adams was named to the Pro Bowl (fourth consecutive year) and First Team All Pro.  Amazingly, Adams did all of this while missing over two games due to a hamstring injury.

The Packers’ second-leading receiver this season was Marquez Valdes-Scantling (MVS).  MVS ended the season with 33 receptions, 690 yards, and six touchdowns.  He also led the NFL with 20.9 yards per reception.  In addition, MVS established himself as one of the best down-field blockers in the league.  On countless occasions, it was MVS spring Packers’ running backs and other receivers for larger gains.  On the famous Aaron Jones run against the Eagles, MVS caught up to Jones and blocked three different defenders, allowing Jones to score.  Of course, his grade will be hurt due to his drops.

Allen Lazard started the season slated as the Packers’ second option at receiver.  Unfortunately, Lazard suffered a core injury that required surgery and he missed some time.  When he came back, it was obvious that he was not 100% and he was not as large of a factor in the passing game as he might have been.  That being said, he finished the season with 33 receptions for 451 yards and three touchdowns.  Most promising, he had a 71.7% catch percentage. 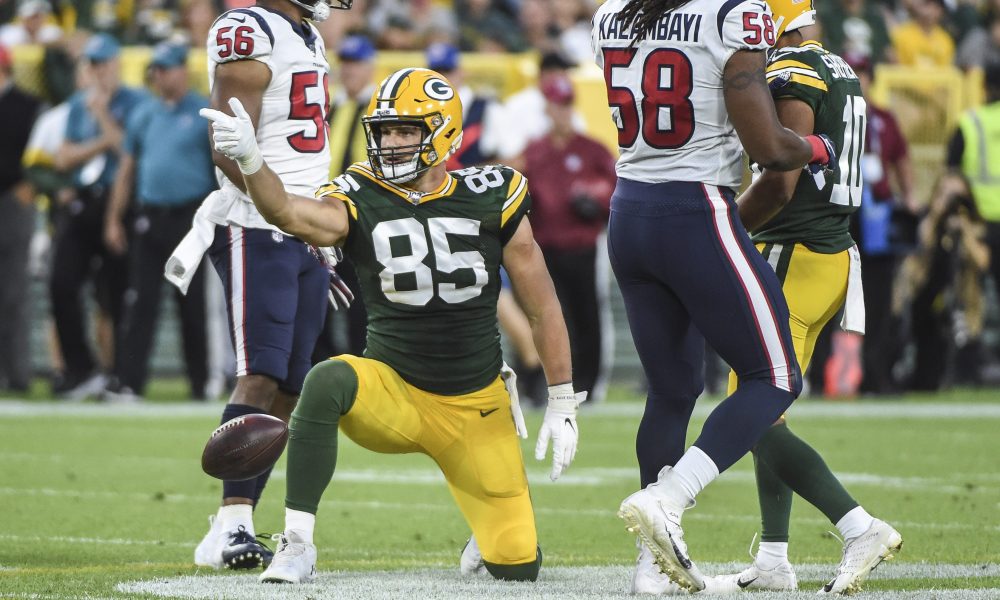 Entering the 2020 season, Jace Sternberger was believed to be the tight end that would be the most efficient weapon in the passing game.  Unfortunately, injuring limited him and Josiah Deguara tore his ACL in the second game of the year.  While unfortunate, they paved the way for Robert Tonyan’s breakout season.  Tonyan ended the season as the Packers’ third leading receiver, the kind of weapon the Packers have been lacking at the position since Jermichael Finley got hurt.

Tonyan finished 2020 with 52 receptions, 586 yards, and 11 touchdowns.  His 11 scores tied the Packers’ record for touchdowns in a season by a tight end (Paul Coffman).  In addition, Tonyan did not drop a single pass all year and had an incredible 88.1% catching percentage.  Unbelievably, Tonyan was snubbed by Pro Bowl voters in favor of Evan Engram.

Marcedes Lewis had a limited role in the passing game, but proved once again to be a great extra blocker.  Dominique Dafney, an undrafted rookie, saw some time late in the season and caught a touchdown in the Packers’ Week 17 victory over the Bears.  What once was a position of weakness is now a position of strength for the Green Bay Packers.

Running Back- Midseason Grade: A; Final Grade: A

The Green Bay Packers’ running back trio has been a constant strength for the team all year long.  Aaron Jones completed his second straight 1,000-yard season and earned his first Pro Bowl nomination.  Jamaal Williams had over 500 rushing yards himself and proved to be an excellent change-of-pace back.  In addition, his value in pass protection rose as he proved to be pretty good at blocking.  Second-round pick AJ Dillon was not used often, but did have one game in which he dominated.  Williams was injured and missed Week 16 against the Titans.  In the snowy weather, Dillon received the majority of the carries and ran for 124 yards and two scores.  While no one really knows what the Packers’ running back room will look like beyond this season, the fact that they have three very good backs right now cannot be denied.

The 2020 Green Bay Packers’ offensive line is the best line they have had in years.  They allowed just 21 sacks all season, the second fewest in the NFL.  While several players missed time with injuries, the rest of them adapted and played out of position to very high levels, for the most part.  Most notably, Elgton Jenkins played at least one snap at all five offensive line positions.  Jenkins, along with David Bakhtiari, were named to the Pro Bowl this year.  In addition, Bakhtiari and Corey Linsley were named to the First Team All Pro.

Unfortunately, the Packers will be without David Bakhtiari going into the playoffs.  The All Pro left tackle tore his ACL in practice.  Without Bakhtiari, though, the rest of the line has admirably filled in.  When he missed three games with a chest injury earlier this year, Aaron Rodgers was sacked just twice.  While his loss is significant, the rest of the line has proven they can step up.