The Bucks welcomed the Celtics to Milwaukee in their first matchup of a two-game series. Giannis returned to the starting lineup after sitting out on Monday night with a knee injury. Having Giannis back in the lineup was huge, but Khris Middleton was the big story of the night. The game was extremely close leading to the final minutes of the game, but the Bucks were able to escape with the win. What were the keys to victory and what are some takeaways from this game? Let’s take a look at three takeaways in our Bucks vs. Celtics recap!

Khris Middleton Has a Huge Game

Khris Middleton performed very well against the Celtics. Stop me if you have heard that before. Middleton led the way in scoring and rebounding posting a stat line of 27 points, 13 rebounds, and 4 assists on 55% shooting. Middleton started off slow but had a stretch where he took over with Giannis on the bench. Giannis was not at 100% tonight after coming off an injury, but Middleton was able to take over and make some plays for Milwaukee. Middleton has had some of his best games against the Celtics, and tonight was no different. Khris has once again proven himself to be a reliable number 2 and made it even more questionable why he was not named an All-Star.

Following some rough stretches with the bench underperforming, Milwaukee’s bench rotation played very well on Wednesday night. The big story off the bench? Bobby Portis. Portis put up an astonishing 21 points, four rebounds, and one assist in 17 minutes. Portis was also able to hit 66% from behind the arc and shot 3/3 at the free-throw line. Bobby showed out tonight and was able to provide a spark off the bench. Sam Merrill, the rookie shooting guard out of Utah State, was able to get some minutes early in the second quarter. Merrill hit a three-pointer in his time on the floor. Connaughton also had a very nice game with 5 points, 6 rebounds, 3 assists, 1 block, and 1 steal. Overall, the bench is beginning to shine once again. Let’s hope for this trend to continue. 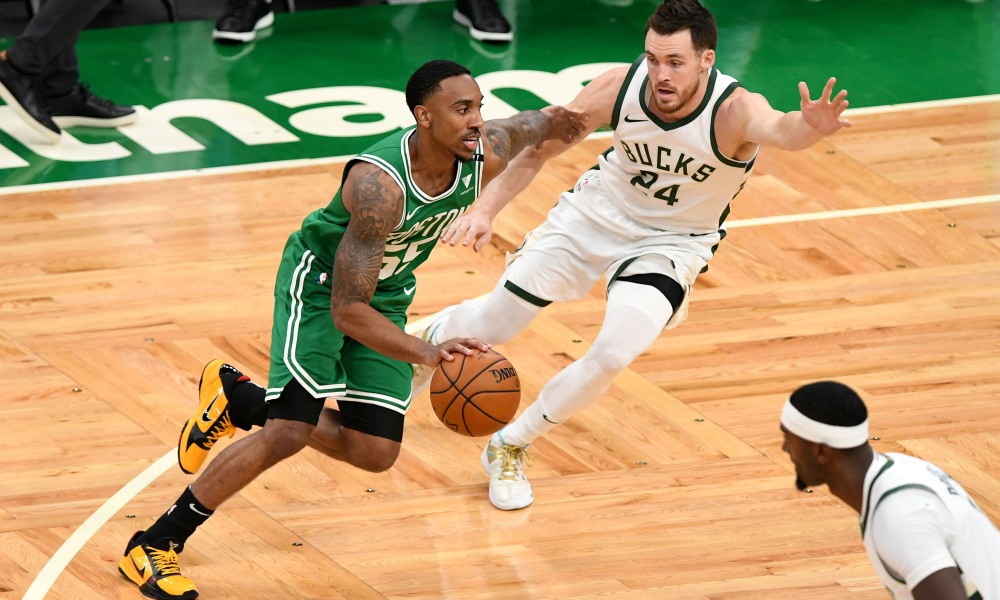 PJ Tucker is a Fantastic Defender

PJ Tucker has not contributed much on the offensive end thus far. However, that is not why the Bucks pursued Tucker and traded for him. Tucker is incredible on the defensive end. Whenever a Celtics player had the ball, Tucker was right there being a pest on defense. PJ’s numbers certainly don’t jump off the stat sheet, as he posted 3 points, 3 rebounds, and 1 block. However, PJ was very influential without the ball in his hands. He was able to create lanes for his teammates and provide a spark in that sense. Tucker has been a great pickup thus far. Though he is undersized as a forward, he plays much bigger than he is, much like Jrue Holiday. If Tucker is able to put some more points up, this team is primed and ready to make a run.

Though the game was only a two-point win for the Bucks, a win is a win. The Bucks had stretches during the game where they looked unstoppable but also had stretches where they could not get a stop. Boston is still a very good team despite what their record shows, and it always feels good to take a win against a playoff team. The Bucks and the Celtics match up again on Friday night as Milwaukee looks to win its ninth straight game. The Celtics will be looking for revenge, but Milwaukee will be ready.