Bucks: Takeaways from Win Over the Pacers Although Valentine’s Day brought some heartbreak to Bucks fans, Tuesday night was a different story. Milwaukee welcomed the Indiana Pacers to Fiserv Forum and played with a lot more aggressiveness. Though the Pacers have just acquired new players, that didn’t stop the Bucks.

The Bucks were in control for this game, they weren’t letting Indiana get any lead on them. Going into the half, the Bucks had a 69-63 lead. Indiana tried to close that gap and gain a lead on Milwaukee, but the closest they got cutting the lead to only five in the fourth quarter, 99-94. Snapping their two-game losing streak, Milwaukee beat the Pacers 128-119 in a thrilling game. Let’s take a look at some takeaways.

Adding Wesley Matthews to the injured sideline was just another hinder for Milwaukee’s bench. Matthews, according to the injury report, was sidelined with right toe soreness. Grayson Allen was also benched on Tuesday due to hip soreness, so Bud needed to find someone to fill minutes.

Lindell Wigginton is really solidifying his place in Milwaukee. The two-way player has been taking all chances to be on the court and taking advantage of those points. Scoring 12 points on 4-of-8 field goal shooting and 3-of-4 from deep. Not only did Wigginton do well offensively, but defensively, he was able to play consistent and strong defense, giving the team an assist in his 28 minutes of play.

Jordan Nwora continues to impress. Hopefully his solid offensive performance shows promise that Nwora will be a valuable player in the future. He scored nine points on 4-of-9 field goal shooting, and 1-of-4 three-point attempts. Nwora handed the team two assists, a steal, and brought down four rebounds. Though he’s getting his minutes, there’s still room for improvement for the sophomore forward.

While not in the starting lineup, Serge Ibaka also put in some minutes for the Bucks on Tuesday. In his second game, he scored nine points on 3-of-3 field goal shooting, and aced his only three-point shot. In addition, he also brought five rebounds. Defensively, he was a force on the court. Getting some help in Mamukelashvili, who shot six points on perfect shooting, Ibaka received the defensive help he needed to keep Indiana out of their zone. 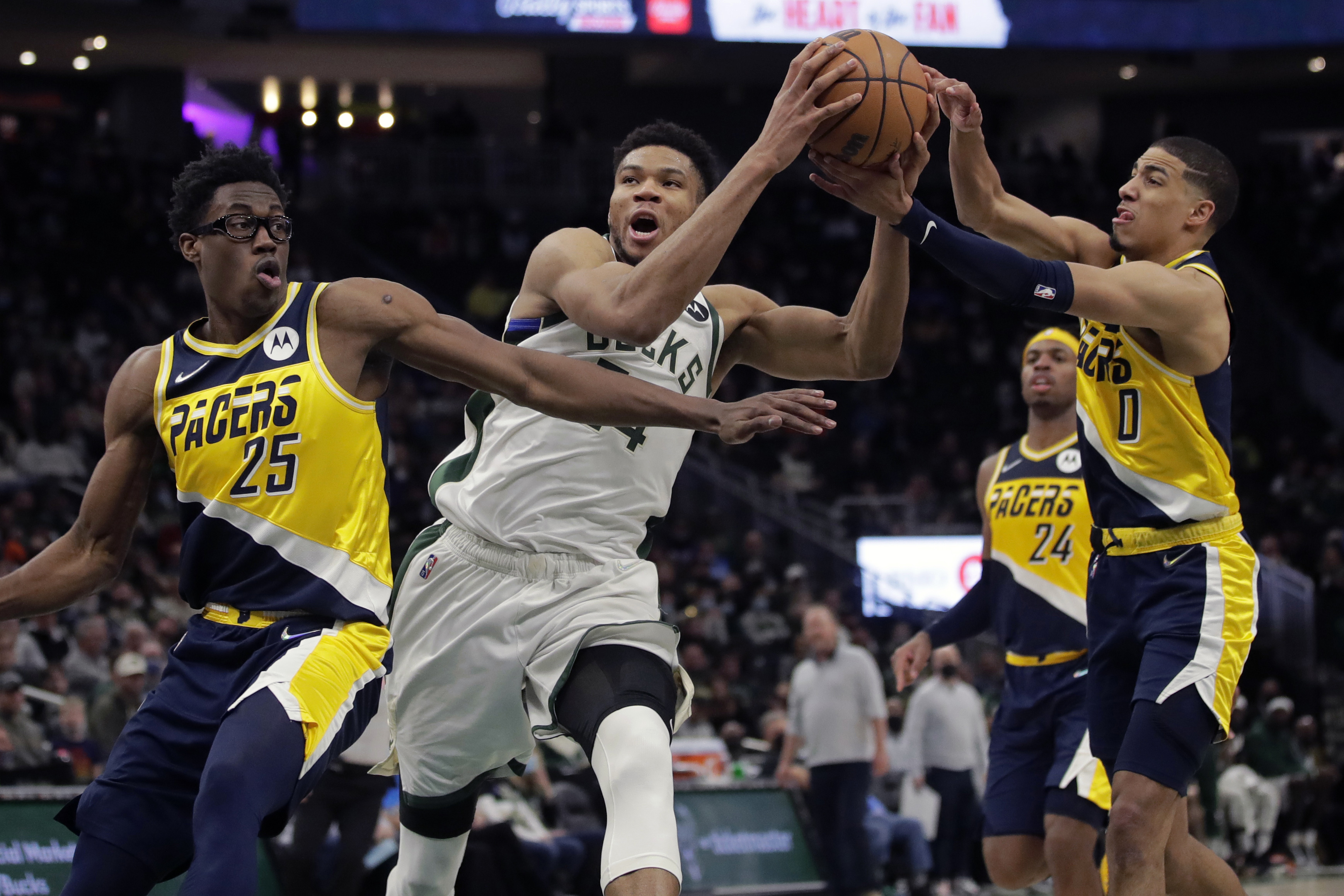 Antetokounmpo missed Monday’s game against the Trail Blazers due to an injury. Tuesday however, he returned to the court and was a huge contributor in Milwaukee’s victory over Indiana. He scored a season-high 50 points, which was just two shy of his career best. Within the first quarter, Giannis knocked down 12 points including two dunks and a three-pointer. The last time Antetokounmpo knocked 50 points in a single game was Game 6 of the 2021 NBA Finals.

He scored his 50 points on 17-of-21 shooting, 81 percent from the field. Found on Twitter from user MrStuff, Giannis Antetokounmpo is just the fourth player in NBA history to score 50 or more points on 21 shots or fewer. Adding to that, Giannis is the ninth player to score 50-plus points while shooting at least 80 percent from the field. From the free-throw line, Giannis was handed 18 total, where he shot 14-of-18, an impressive 77.8 percent.

Not bad. Giannis had 50, 14 & 4 tonight. He is just the fourth player in NBA history to score 50 or more points on 21 or fewer shots. AND he is just the ninth player ever to score 50 plus points while shooting at least 80 percent from the field #collect #Giannis #FearTheDeer pic.twitter.com/irCIBiHyAu

Defensively, there was no stopping Giannis on the court. He’s favored to win Defensive Player of the Year once again, and last night he had 10 DREB, 14 total rebounds, and helped the team with four assists. Per CBS Sports, Giannis is now shooting 72 percent on the season, which marks a best since 2019.

Giannis Antetokounmpo now leads the NBA in scoring with 29.4 PPG despite being 54th in minutes per game (32.6).

Milwaukee will hit the road on Thursday and face the 76ers.  You can catch that action on Bally Sports Wisconsin starting at 7:30 P.M. CST.