The Brewers ended their game Saturday in a tie against the Seattle Mariners. With the off day Sunday, it’s a perfect time to talk a little about what’s been going on so far.

Looking back at 2021, he started off strong. He had a strong 2021 Spring Training appearance, showing Counsell that he would eventually be a big leaguer. As they got into the season, it was clear that Tyrone Taylor was not going to be a starting outfielder. He had spent a majority of the season bouncing back and forth from Milwaukee to Nashville. But, every time Taylor was in Milwaukee, he hit the ball, and he hit it well.

Appearing in 93 games, he posted a slashline of .247/.321/.457 with an OPS of .778; This included 12 homers, and he drove in 43. Some highlights of Tyrone Taylor also include hitting two grand slams, and being a vital piece for the Brewers as they made their playoff run.

As we head into the 2022 season, Taylor continues to prove that he is worthy of a permanent roster spot in Milwaukee.

Tyrone Taylor has a lot of potential. 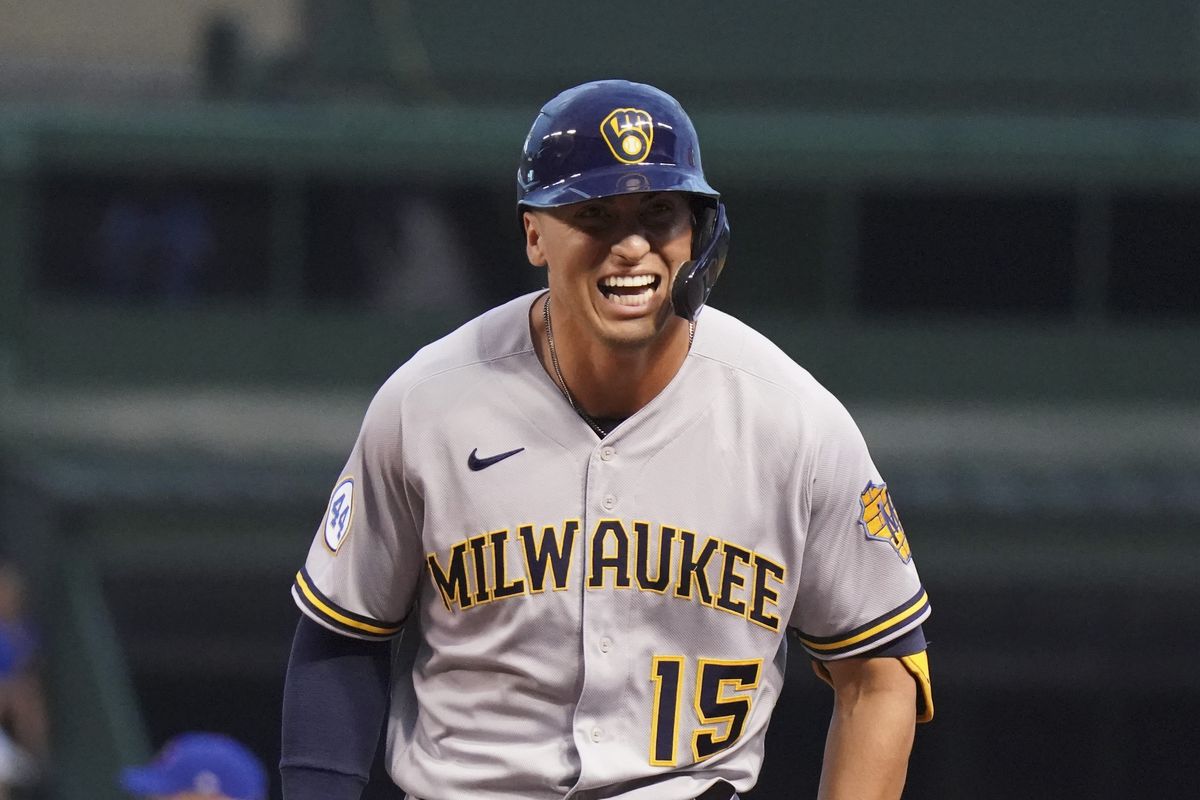 Although the Brewers have recently welcomed McCutchen and Hunter Renfroe, the show Taylor has been putting on in this year’s Spring Training is impressive.

So far, Taylor has hit three home runs; One of those being a three-run homer in Friday’s game against Oakland (The only three runs scored in that game). He hit his most recent in Saturday’s tie against the Seattle Mariners. He also has started in five games, all in the outfield.

Once the Brewers parted ways with Avisail Garcia, things were looking more promising for Taylor to have an everyday role in the outfield. But then the Brewers traded JBJ for Hunter Renfroe, pushing Taylor back to the 4th man in the outfield. While that’s not a bad thing for any player, for a player like Tyrone Taylor, being the everyday guy would be more ideal.

Then the Brewers turn around and sign Andrew McCutchen. It’s likely fans are going to see McCutchen fill that DH role, but, he has experience in the outfield, and could be playing some innings out there. With Tyrone Taylor’s hot bat in Spring Training, having him as a potential DH option wouldn’t be a bad idea.

Where are we gonna see Tyrone Taylor this season?

With players like Christian Yelich and Lorenzo Cain being the everyday veterans, they’re going to need days off. For Cain, who has struggled with some injuries, it’s very likely that we could see Taylor playing a couple of games to give Cain some rest. Tyrone Taylor adds a lot of depth to the already stacked outfield. Just basing things off of previous seasons with both Yelich and Cain battling injuries, the opportunity for Taylor to have optimal playing time in the outfield is still out there.

It’s not like he’s going to be optioned somewhere else; He’s out of minor league options, the only option the Brewers would have would be to trade him. Trading Taylor would be a huge mistake on their part. While he’s been in the organization for a couple of years, they still have yet to give him that big chance to prove himself. The 93 games last season was the most that he had appeared in wearing a Brewers uniform.

While it would be nice to have him be an everyday starter, I know that’s not the feasible option. I am saying however, that he deserves to get a lot more playing time this season and be a helpful part of the Brewers’ roster.