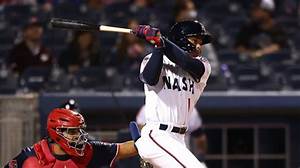 The 2022 season has not been off to a great start for the Brewers number 4 propsect Brice Turang. The shortstop came into Friday night hitting .220 with just 4 RBI through the teams first 12 games. Fortunately for the rising star, all that changed in Nashville last night.

Turang tied the Nashville Sounds single game hit record by recording 5 hits in 5 at bats en route to a 12-2 win over Charlotte. Turang complemented the 5 hits with three RBI, 2 runs scored and 2 doubles.

Turang led off his great night with a single and the first and another in the third. Then came and RBI double in the fourth and a run scoring single in the fifth. Turang capped the night with a double in the seventh. Turang became just the eigth player in the Sounds 44 year history. The last player to achieve this accomplishment was Mark Canha in 2017. Canha has carved out his own role in the MLB with the Mets and Athletics.

While still early in the season, Turang saw his batting average jump to .291 following the game. Turang has driven in 7 runs through 13 games as well. Turang, still working on developing power, has been putting emphasis on hitting line drives and hitting to all parts of the park. Friday evening showed just that. The lefty’s final hit of the night was a double off the left field wall.

Have a night, Brice! The kid ties a Nashville Sounds franchise record with 5 hits tonight. The first 5-hit game of his career. @BRiCEcTuRANG pic.twitter.com/2K0Oj01KWE

Along with Turang’s big night there were plenty other talking points from the Sounds win. Ethan Small, the Brewers’s #7 prospect, had another scoreless outing. Small kept Charlotte scoreless through five innings pitched with 6 strikeouts to match. That brings Small’s ERA to 0.49 through his first 18.1 innings pitched in 2022. The two figure to find their way to the major league roster in no time with these kind of performances.

In The Park Grand Slam?

In perhaps one of the most impressive feats last night, Alex Jackson hit an in-the-park grand slam last night as well. Jackson pulled a ball down the left field line into the Sounds on-field bullpen. As the ball rattled into the bullpen area, Charlotte appealed for a ground rule double due to the ball being out of play. As Charlotte appealed Jackson scampered around the bases and scored. Umpires ruled in favor of the Sounds and awarded Jackson the grand slam. One of the weirder things you may see this season, but hey, that’s baseball!

In all its glory… @alex_jaxxsun's inside-the-park grand slam! The first of its kind in @FirstHorizonPrk history. It was weird… but we aren't complaining. @SportsCenter @MiLB pic.twitter.com/KmzauFIo46