When the term “vintage” is used to describe a player’s performance, it usually refers to a player who delivers a brilliant performance like those they had in their prime.  For Freddy Peralta, it is not such a great term.  Vintage Peralta struggled in the first inning of games, giving up multiple runs before settling down and dominating for a few innings.  Such was the case on Wednesday night.  Peralta allowed the first five Phillies batters to score.  Most of these runs came from a grand slam by Didi Gregorius.  After the carnage was over, Peralta struck out the next six Phillies batters.

The Bullpen Is [Really] Good

Despite the loss, the Brewers have to feel good about their bullpen.  Peralta ended up pitching four innings, and allowed those five runs.  After he came out, Drew Rasmussen pitched two innings of scoreless, hitless relief.  Brent Suter pitched the seventh, allowing no runs on no hits.  Finally, Brad Boxberger pitched the eighth with matching results.

12 up, 12 down for the Brewers bullpen tonight with 5 strikeouts. (Rasmussen, Suter, Boxburger) Pretty impressive! Let’s hope it matters.

Unfortunately, it was not enough. 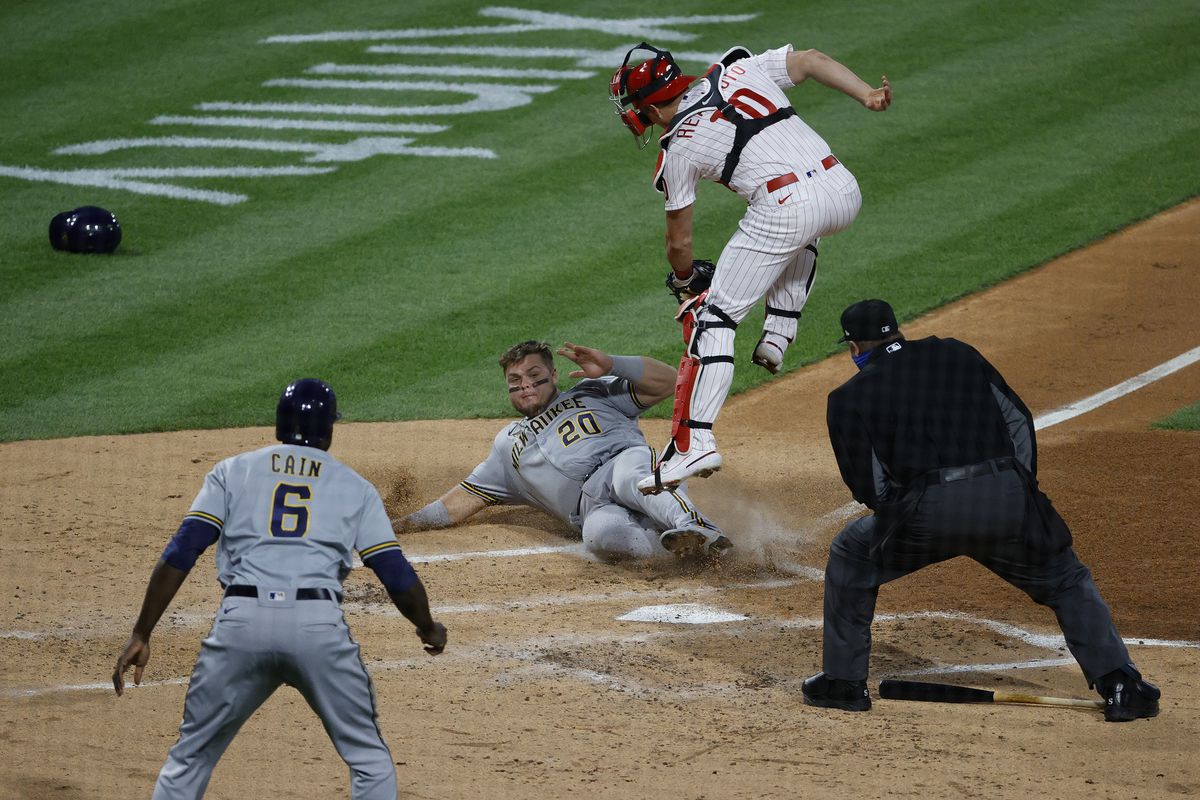 Despite an early hole, the Brewers had no issues getting runners on base.  The problem was getting the runners home.  Many times this season, the inability of the Brewers to hit with runners in scoring position has led to several frustrating losses.

At the top of the third inning, the Brewers loaded the bases with two outs.  Avisail Garcia, who had four hits, singled home Lorenzo Cain.  However, Daniel Vogelbach was thrown out at home, ending the inning.

In the fifth inning, The Brewers got a second run with a leadoff home run by Tyrone Taylor.  Following a Kolten Wong lineout, Cain walked and Vogelbach singled.  With runners on first and second with just one out, Shaw lined out as well. Garcia then drove in Cain and Vogelbach, and Jackie Bradley Jr. walked.  With two on and two out, Pablo Reyes struck out.  The Brewers left two more men on base.

In the eighth inning, Gracia led off with a booming double.  Billy McKinney proceeded to strikeout and Reyes fouled out.  Luke Maile was hit by a pitch before Taylor grounded out to end the inning.  Again, the Brewers had a runner in scoring position with no outs, and could not bring hi around to score.

Finally in the ninth inning, Cain walked following a Kolten Wong groundout.  Cain stole second, meaning the Brewers had another runner in scoring position with less than two outs.  Luis Urias and Travis Shaw each struck out, ending the game.

Overall, the Brewers were 2-9 with runners in scoring position.  Avisail Garcia was 2-2, the rest of the team 0-7.  The Brewers left nine runners on base.