Brewers’ Bats on Fire in Win Against Reds After what seemed to be a struggling weekend against the Cincinnati Reds, the Milwaukee Brewers finally came out on top, winning Sunday’s game 9-3 at Miller Park. 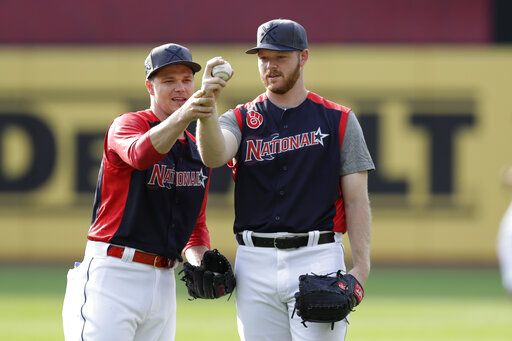 It was an aces showdown with the crew’s own Brandon Woodruff and Reds’ Sonny Gray who went into this game 3-0 on the season with a 0.96 ERA. Strangely enough, both seemed to be struggling under the hot sun beaming over Miller Park. Reds were first to get on board with an RBI single from Jesse Winker who went 3-for-4 at the plate. In the first inning alone, Woodruff was already 30 pitches in; Something that is very unusual for the Brewers’ ace.

Gray also walked batters in the first inning and was able to keep the Brewers hitless until Keston Hiura’s single in the third inning.

The Bats Woke Up

It was looking as though the Brewers’ offense was struggling big time. The last two games really showed that there was something off about the Brewers and their hitting. Christian Yelich, who people had been concerned with in regards to a slump, ended up hitting a triple off a fastball from Gray. Yelich drove Hiura in to get them on the board.

However, the game wouldn’t stay tied for long as Jesse Winker came up for the second time and ended up hitting a long home-run off Woodruff, putting the Reds up 2-1. The Brewers bounced back, though, and would load the bases in the bottom of the fourth against Gray. It wouldn’t matter anyway as Eric Sogard would ground out on the first pitch, ending the rally.

Sonny Gray was able to work quick through the fifth but would see himself in a sticky situation entering the sixth inning. Justin Smoak doubled off the first pitch of the inning, followed by Mark Mathias who would single, putting runners on first and third. Mathias stole second and it brought up Manny Pina who would tie the game with an RBI single.

Manny Piña ekes one through and we’re tied up!#ThisIsMyCrew pic.twitter.com/EWuETxqBuY

Michael Lorenzen came in to relieve Gray and walked Sogard on four pitches to yet again, load the bases. Lorenzen gave up an RBI single to Keston Hiura and walked Yelich and Logan Morrison back-to-back. As Lorenzen left the mound, he was seen and heard screaming something into his glove, mainly out of frustration. He would leave the Reds trailing the crew 5-2.

Cody Reed relieved Lorenzen and got Avisail Garcia to ground out, but Smoak was able to keep his bat hot to drive in a 2-run RBI single. The Brewers led 7-2 as they were going through the order again.

The Brewers weren’t done yet, though. They would add two more runs when Hiura would homer to center going three-for-four during the game. Then Christian Yelich proved the slump was merely a silly thought when he smashed a bomb off the Miller Lite sign on the scoreboard. This would bring the Brewers up 9-2.

The Reds would try and bounce back from the seven-run deficit but were only able to bring in one run by Freddy Galvis on a two-out RBI. Alex Claudio was on the mound for the Brewers and would walk Philip Ervin and hit Shogo Akiyama with a pitch, loading the bases. This would bring up Nick Castellanos, reminding fans of a similar situation of yesterday’s game when Corbin Burnes took the mound. Luckily, Claudio was able to ground out Castellanos to put an end to the game.