Injury news has become all too common for Brewers fans and Sunday morning was no different. After sitting out the past few games with a left calf strain, Hunter Renfroe was added to the injured list. The placement will be retroactive to June 23rd putting Renfroe in line to return the 4th of July.

OF Hunter Renfroe placed on the 10-day injured list, retroactive to 6/23, with a left calf strain.

Renfroe has been a great addition to the Brewers lineup this season. Renfroe is hitting .247 with 13 home runs and 27 RBI through the first 3 months of the season.  Earlier in the season he missed time due to a hamstring strain.  His season numbers could have been higher had he not missed time with a previous IL stint.

The move to put him on the IL with a calf strain is most likely precautionary as Renfroe was available Saturday in an emergency situation. The Brewers have been known to be cautious with calf and leg injuries in general. With this move Renfroe will have time to rest up and reset before the Cubs come to town starting July 4th. 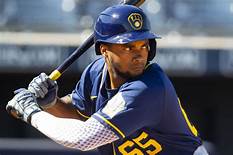 In a corresponding move, the Brewers have recalled 28 year old Pablo Reyes from Triple-A Nashville. Reyes has been up and down between Milwaukee the last two seasons and provides some infield flexibility. Reyes is 4 for 14 this season in limited appearances.