After the 2019 season that Corbin Burnes had, very few could have imagined the kind of success he would enjoy in 2020.  In fact, had it not been for him, the team very well may not have made the playoffs. 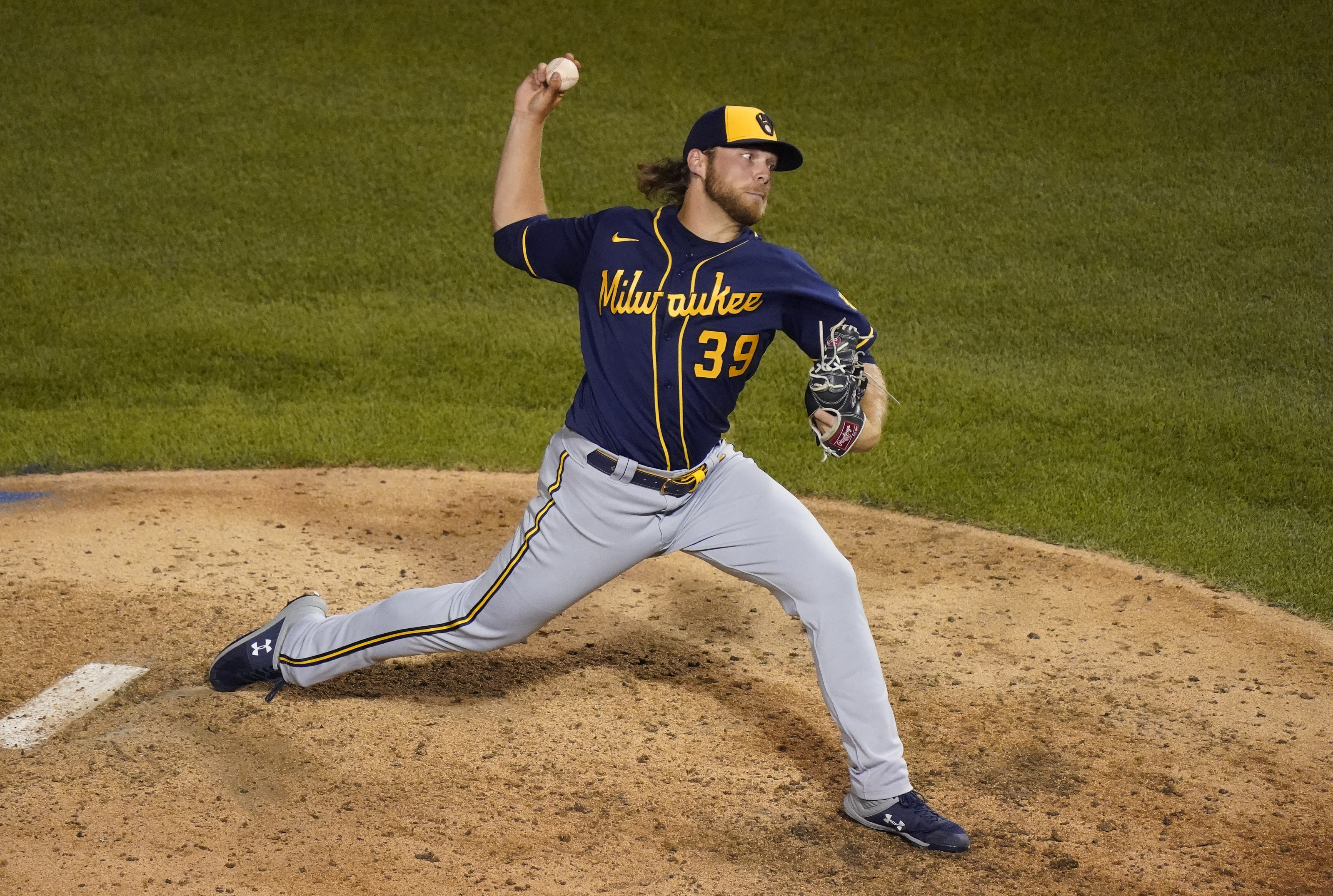 Burnes gave Brewers fans and front office officials a lot to be hopeful for in 2018.  As a rookie coming out of the pen, he went 7-0 with a 2.61 ERA and 1.00 WHIP.  Control, though, was a concern, but not enough that it kept the Brewers from giving him a shot in the starting rotation in 2019.

A Renaissance Year for Corbin Burnes in 2020

Corbin Burnes returned to the big league roster for the shortened 2020 season.  Due to concern about his previous struggles, he started out the season in the bullpen.  Unexpectedly, he started the Brewers’ second game of the season after Brett Anderson was forced to miss time with a blister.  The Brewers won, but Burnes was unable to pitch through the fourth inning.  He finished with 3.2 innings pitched, two hits, one run, six strikeouts, and one walk.

After a series of injuries and implosions on the Brewers starting staff, Burnes was added as a regular starter.  However, most of his starts were much like his first.  He did not pitch deep into games, his pitch counts were high early in the games, and the Brewers lost five straight games in which he pitched.

Corbin Burnes Takes the Next Step

On Friday August 28, Corbin Burnes flipped a switch and went on a pitching run so dominant, he kept the Brewers in playoff contention.  He earned his first win of the season that day (over a month since he season debut) against the Pittsburgh Pirates.  Burnes tossed six innings of three hit ball, allowing no runs, walking just one, and striking out 10.

In his next start against the Indians, Burnes again went six innings, allowing just three hits, a single unearned run, and two walks while striking out nine.  Most importantly, the Brewers won and Burnes moved to 2-0 on the season, his ERA down to 2.35.  On September 9, the Brewers and Burnes enjoyed arguably their best game of the season against the Tigers.  The team won 19-0, and Corbin tossed seven innings of one-hit ball, walking none, and striking out 11.  The win moved him to 3-0 on the season and lowered his ERA to 1.99.

The Brewers would lose Burnes’ next start 3-2 to the Cardinals.  Burnes struggled with a high pitch count early, once again, and could not get through the fourth inning.  His pitching line, though, was not entirely awful.  Despite receiving the loss, Burnes went 4.2 innings and allowed just a single run.  The fact that he was able to limit the damage was astounding considering he gave up five hits and three walks.  He was helped, no doubt, by his 10 strikeouts.  Burnes received a no decision that day, but slightly lowered his ERA to 1.98.

Corbin Burnes and the Brewers needed wins against the Kansas City Royals, and Burnes delivered one.  On September 19, Burnes tossed six innings of four-hit ball, allowed no runs or walks, and struck out nine.  He moved to 4-0 on the season, and lowered his ERA to 1.77.  Cy Young talks started to swirl.

Unfortunately for Burnes and the Brewers, that would be his final victory of 2020.  In his last start of the season, he only went 3.2 innings, gave up three runs on six hits and two walks, and struck out just five.  He did not seem like himself.  It was soon revealed that he wasn’t, and Burnes was placed on the IL with an oblique strain.  He missed the remainder of the season and did not pitch in the playoffs.

In 2020, Corbin Burnes proved that he is a legitimate front-end starter who can be an annual candidate for the Cy Young Award.  Had he not gotten hurt, perhaps the Brewers 2020 playoff exit would have been delayed.  It is very exciting to think about what kind of numbers he will put up in a full 162-game season.