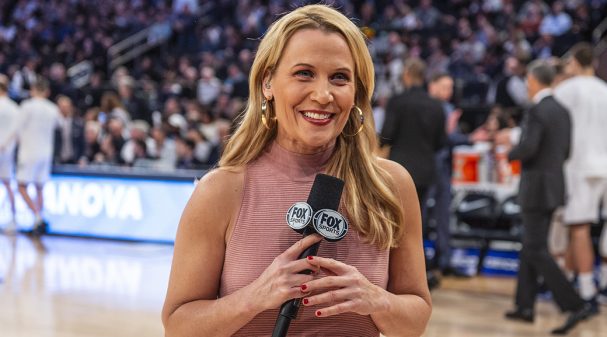 The glass ceiling is in shambles once again. In such a progressive time for women in sports, the Milwaukee Bucks added to the advancement. The team announced today via twitter that Lisa Byington would be taking over television play-by-play announcing for them. Any game broadcasted on Bally Sports Wisconsin will feature Byington in the booth. This comes to light in the retirement of long-time Bucks broadcaster Jim Paschke’s retirement. Paschke left some big shoes to fill and only time will tell how Byington fits into them.

Experience is not a department that the new Bucks announcer lacks in. With past jobs as an announcer, studio host, producer, and reporter, Byington has all her bases covered. She has worked for the likes of Fox Sports, FS1, Big Ten Network, CBS, Turner Sports, Pac-12 Network, ESPN, and SEC Network. From commentating basketball to soccer to football, she has done it all. Not to mention, this isn’t even the first time she has made history. On March 19, 2021, she became the first woman to do play-by-play in March Madness history for CBS and Turner Sports. Likewise, Byington spent her summer in Tokyo doing play-by-play for men’s and women’s soccer at the 2020 Olympic games.

This hire fits the “Owning The Future” moral of the Milwaukee Bucks Organization. Giving opportunities to women in sports in any capacity is groundbreaking. It’s refreshing to see the defending champions of the league to take this step and open the door for, hopefully, many more hires like this around the league.