Milwaukee Bucks superstar Giannis Antetokounmpo has committed to playing for the Greek national team at EuroBasket 2022. In addition, Bucks assistant coach Josh Oppenheimer will join as an assistant coach. It was reported this morning that Giannis has suffered an injury playing for Greece, with the severity not quite known yet.

Giannis Injured While Playing For Greece:

Hellenic Basketball Federation on Giannis' Antetokounmpo back : "MRI didn't show any acute damage. He will continue his rehabilitation".

According to Alexandros Trigas, The EEC informed that Giannis Antetokounmpo’s problem in the back is not serious, since “the magnetic resonance imaging he underwent did not show any acute damage”. The Greek Freak continues his rehabilitation and individual program.

End of alert for Giannis Antetokounmpo , after the results of the MRI to which he was submitted. According to the official information of the EEC, the Greek Freak is not facing a serious problem in the lower back (which deprived him of participation in the friendly against Turkey ), since ” the MRI scan he underwent did not show any acute damage. The player continues his rehabilitation following a personalized program “.

EuroBasket is a quadrennial tournament contested between the national teams of European countries. This edition was supposed to be played in 2021, but when the 2020 Olympics were delayed a year due to COVID-19, EuroBasket was pushed back as well.

This is worst case scenario for the Milwaukee Bucks:

Antetokounmpo once held the league’s largest contract for a player in league history. Known as the “Greek Freak,” he signed a $228 million supermax extension deal over five years. This contract will keep him in Milwaukee through the 2025-26 season.  Here is a snapchat of how massive his contract is: 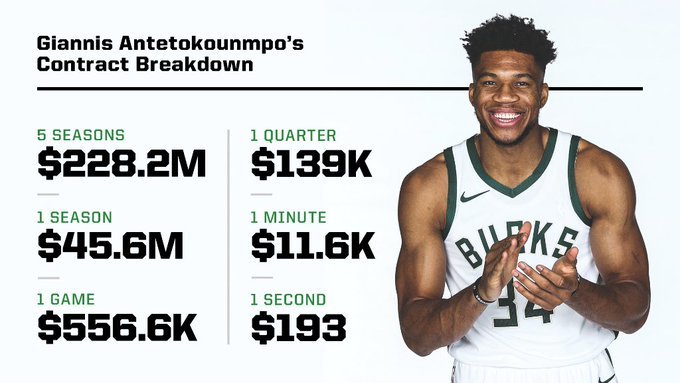 While all reports so far of Giannis’ injury are labeling it as minor, we saw Brook Lopez be held out nearly the entire 2021-2022 for back issues.  As of right now we are in the pretty “unknown” regarding how minor (or how bad) this injury is.  We will update you as soon as we know more.