After defeating the Cornhuskers Wednesday evening, the Badgers are set to square off with Penn State for the third time this season.

Wisconsin lost five of their last six games falling to Iowa Sunday 77-73. Although the Badgers made a second-half charge, it wasn’t enough to secure the victory in Iowa City.

Wisconsin was led by senior forward Micah Potter with 23 points, knocking down four of his six three-point attempts. Brad Davison and Johnathan Davis finished with 14 and 11 points respectfully.

Wisconsin split with the Nittany Lions in Big Ten play. The Badgers lost 81-71 after giving up 50 points in the second half. However, Wisconsin responded shortly after their loss in University Park. The Badgers won 72-56 and took complete control of the second half, limiting Penn State to just 25 points.

Tip-off for the game against Penn State is set for approximately 8:00 PM on the Big Ten Network.

Although Wisconsin had high expectations this season, the Badgers fell short in their campaign to repeat as Big Ten champs. With the difficulty of the Big Ten this season and Wisconsin’s second-half schedule, it was too much for the Badgers to overcome.

The Badgers started 6-2 in conference play, defeating teams like Minnesota and Michigan State who were currently ranked at that time. However, it didn’t take long for the season to completely shift. Wisconsin would go on to finish 4-8 the rest of the way in conference play and struggled mightily on offense. With numerous scoring droughts, the Badgers had a difficult time being able to stay with the top teams in the conference. Wisconsin lost all eight of their games against the top five teams.

Despite the disappointing finish, The Badger’s are very much locked in for what’s to come next. Their last two games against Purdue and Iowa felt a bit different than before. The bench provided some energy and guys were calling things out on defense. Although it doesn’t seem like much, it was a small spark that this team needed.

Not the result the #Badgers needed, but for the first time in a long time, I think they leave the floor feeling pretty good about their play/effort against an upper echelon team.

On Monday morning, senior guard D’Mitrik Trice tweeted an important note. Starting now, Wisconsin is 0-0. This team can move past their difficult season and look to make the end into something special. If the Badgers are able to get hot from three-point range and avoid scoring doubts, there’s no reason they can’t hang with the better teams. Picking up a few wins could go a long way for this team. Especially with the NCAA Tournament right around the corner. 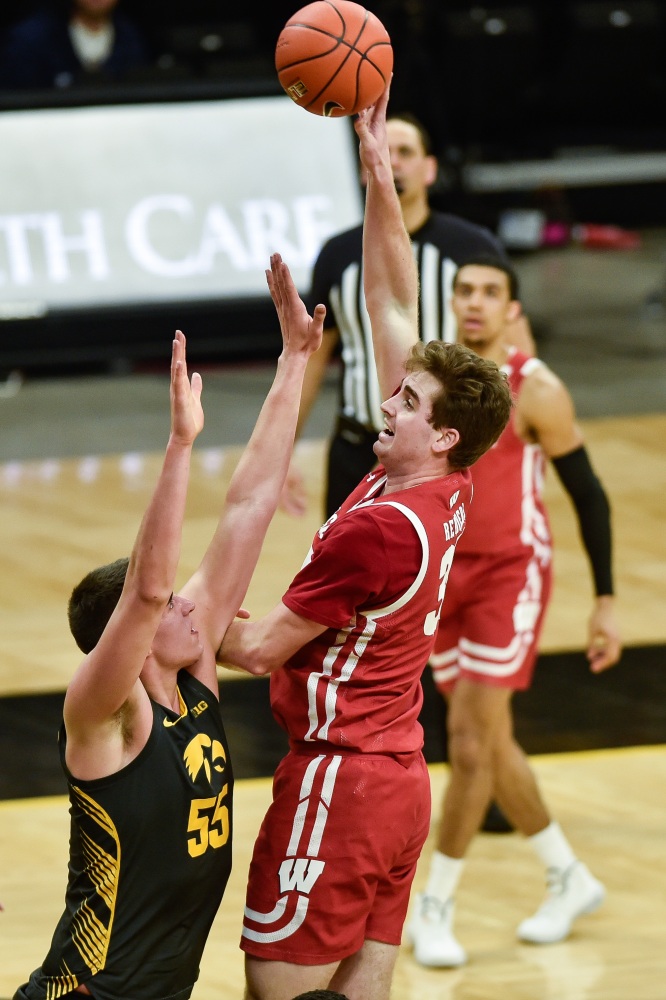 Find Ways to Score Inside

I’ve said this a lot this season and I’ll continue to say it: Wisconsin must find ways to score inside. At times, Wisconsin has been too reliant on their three-point shooting to get them out of games. Against lesser opponents earlier in the season, the Badgers were able to do so. However, once Wisconsin got to conference play, it became much more difficult to do so. For a team once shooting as high as over 41% on the season from the three-point range, finished the regular season at 35.2%.

Although it’s been difficult for most of the year, Wisconsin has ways they can be more balanced inside. One way they can drive to the hoop and find ways to get to the free-throw line. Toward the end of the season, the Badgers had a much more difficult time creating contact and getting extra points from free throws. For a team shooting 76% on the year, Wisconsin must be more aggressive and continuously attack the lane.

#Badgers have to find a way to start generating more points in the paint/getting to the free throw line. Shooting doesn't appear to be coming back.

These abysmal scoring droughts continue to put them back on their heels. UW scored two points in the first 7:18 today.

Another way for Wisconsin to create more looks inside is to run more sets using Johnathan Davis. Davis has been one of Wisconsin’s best players at attacking the hoop. When the three-point shooting has gone cold, Davis is one player that has helped keep the offense afloat. His ability to finish inside and create space is something the Badgers need desperately. Running more sets through Johnny could lead to more balance on offense. 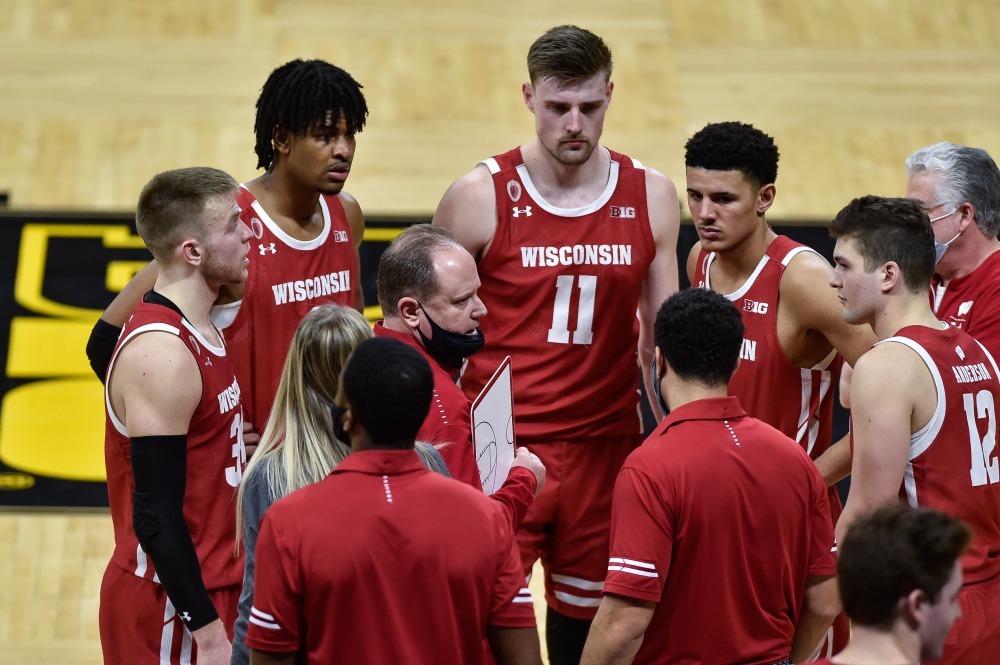 Because Wisconsin has a smaller team than most in the Big Ten, second-chance opportunities have really hurt the defense this season. Luka Garza had numerous second chances against the Badgers in both games this season, which led to a number of second-chance opportunities for Iowa. Looking back at some of the games against Michigan and Illinois, the big men (Kofi Cockburn and Hunter Dickinson) controlled the game for each team. It made it difficult for Wisconsin to make stops and grab rebounds.

Penn State’s John Harrar is the key for Wisconsin to contain. Although averaging nine points per game, Harrar’s rebounding is his best weapon. The big man averages 8.5 boards per game and the team’s leading rebounder. Along with Harrar’s success, the Nittany Lions averaged 12.2 offensive rebounds per game, placing them in the top 40 in the country. Wisconsin held Penn State to just seven offensive boards in the loss but gave up 13 in the second match-up victory. If they can limit the extra chances, Wisconsin will have a significant advantage throughout the game. 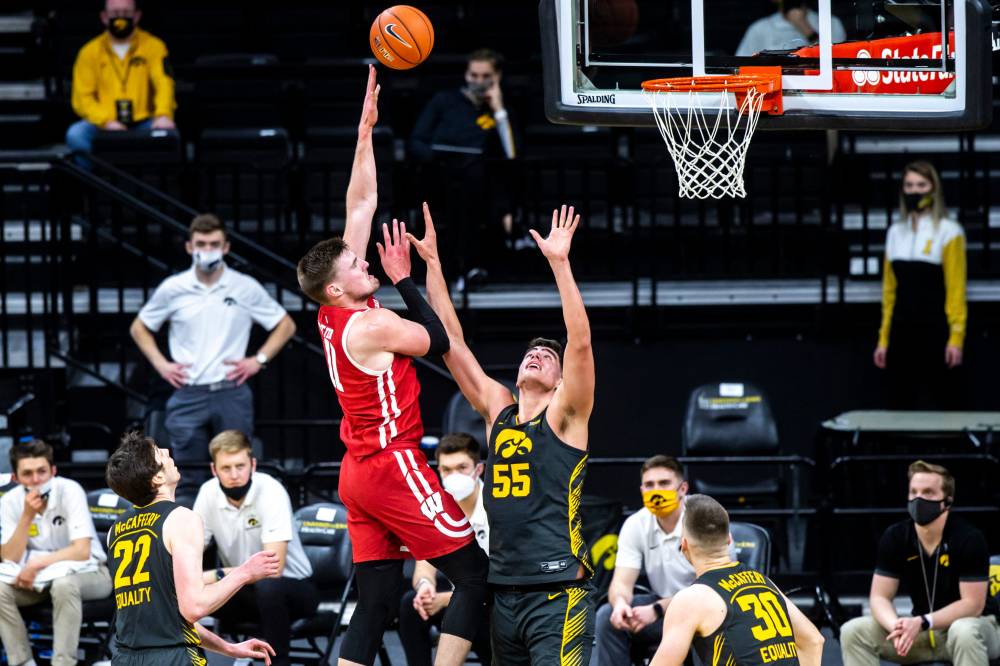 The Big Ten Tournament can lead to a lot of excitement. Upsets from lower seeds, buzzer-beater wins, and competitive basketball from start to finish. With how the season has progressed, there’s no doubt in mind this is exactly what will see. Especially with how COVID-19 has changed the playing field.

Wisconsin could be on course toward payback in this year’s tournament. With a win Thursday, the Badgers would have another matchup with 3 seeded Iowa. After how the game finished on Sunday, I think there’s a sour taste in Wisconsin’s mouth they’d like to change. There’s reason to believe that the Badger’s goal is to have one more crack at the Hawkeyes before heading into the NCAA tournament. 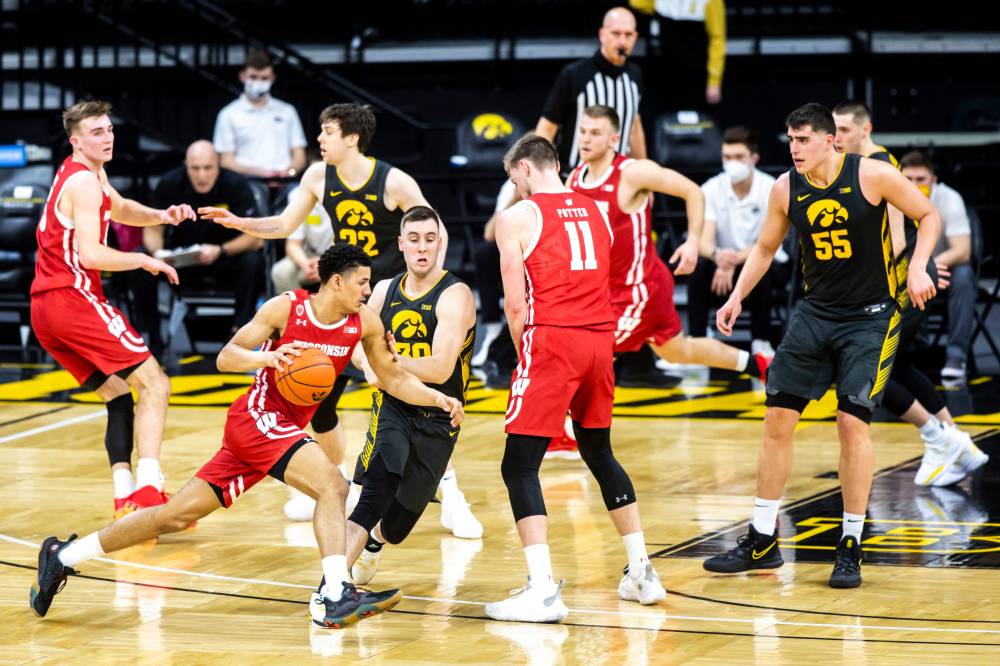 However, there’s no reason to look past this Penn State team either. After a season split, I’m sure the Nittany Lions would love to make a run of their own to end the year. Penn State has won three of their last four games, including Minnesota, Nebraska, and Maryland. The Nittany Lions seem to be clicking at the right time heading into the Big Ten Tournament. Their fast pace offense gave Wisconsin issues in their loss back in January. Particularly their ability to attack the rim and score inside.

In the end, I’m going with Wisconsin to get it done. With just two losses on the year against teams lower than them in the Big Ten, there’s no reason to believe they won’t come out on top Thursday evening. That doesn’t mean Penn State won’t be in this game though. I expect a back and forth game to start but the Badger’s pulling ahead later in the second half. Look out for guys like Trice and Potter to have big games as well.