Bears RB Speaks Out About Controversial Call At Lambeau On Sunday night the Chicago Bears faced off against the Green Packers at Lambeau Field.  The Bears have not been on the winning side of the series in quite some time. Not to say that they did not have a chance. But one call did not go the way that a Bears player thought it should have.

After the Bears took a loss to the Packers, the running back gave his opinion on what he believed was the difference with the controversial call in the 4th quarter.

David Montgomery stated “I (saw) a touchdown,” Montgomery told reporters, according to the Sun-Times. “I was right next to the ball. But, I mean, I wouldn’t expect anything less — we’re not in Soldier Field. Home-field advantage. Next time we’ve just gotta be sure that we put it in, no question marks.”

NFL fans questioned why the Chicago Bears were in the shotgun formation on the 4th down play that would have brought them within just seven points. Clearly it was not a touchdown as the ball did not go over the goal line by Bears QB Justin Fields with 8 minutes remaining in the game.

Bears vs. Packers Running Back Stats

The Bears running game picked up during the second half. Montgomery had 15 carries for 122 yards in the game. The Packers ran the ball better than in Week 1. Aaron Jones ran the ball 15 times for 132 yards and two scores. Jones also had three receptions for 38 yards and one receiving touchdown. AJ Dillion had 18 carries for 61 yards. Both running backs carried the load for the Packers throughout Sunday night.

The Green Bay Packers defeated their rivals 27-10 at Lambeau Field after a gritty performance from Aaron Rodgers and the wide receiving core. Of course, everyone has their own thoughts on what happened with the controversial call made by the officials in the final quarter. The Chicago Bears were just not able to get it done once again. 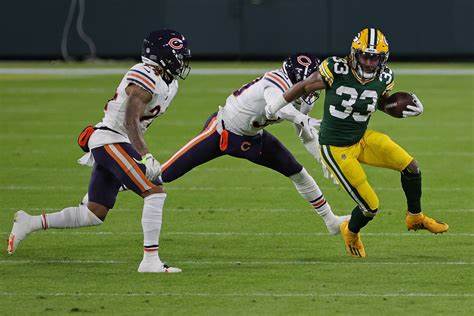