The Milwaukee Brewers and Philadelphia Phillies series finale on Sunday Night Baseball was a clear example of a major change that needs to happen in Major League Baseball. Angel Hernandez should no longer be an umpire. The strike zone would continue to stretch and then get smaller throughout the night. On what was supposed to be a great game between two teams turned into a clown ump show by Angel Hernandez. He couldn’t make the correct calls over the weekend at first base, and he continued on Sunday night behind the plate. He has no business being behind there anymore.

Hernandez Blows The Bottom Of The Ninth

You knew something was coming. In the 8th inning with Devin Williams on the mound, suddenly the strike zone got smaller. The Brewers radio team made sure to point out that the Milwaukee dugout was chirping at Angel because of the zone switching again. Williams was shocked that pitches were suddenly being called balls that had been strikes all night. If you want a big strike zone that is fine, but don’t suddenly change it with the game on the line. 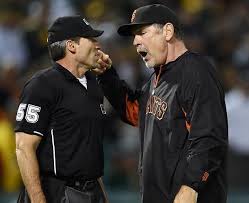 In the bottom of the ninth, the Brewers were up 1-0 after Christian Yelich brought in the first run of the game on a sacrifice fly. Josh Hader took the mound. After J.T. Realmuto grounded out, Kyle Schwarber came to the plate. The former Chicago Cubs outfielder has never been good against Hader. In fact, Schwarber is 0-11 lifetime against Haderade. So he was already frustrated with that stat and Angel.

Then, the moment almost everyone has seen already happened:

In a 1-run game in the 9th, Kyle Schwarber struck out on a 3-2 pitch looking, and proceeded to share his thoughts with Ángel Hernández and his strike zone.

As a Brewers fan, you have to agree with Kyle. It was a ball. Look at the clip again, even Josh Hader agreed it was a bad call. It’s downright hilarious seeing his mouth as he walked away from the mound, knowing he got away with one.

Schwarber was obviously ejected, but good on him. And give credit to the Brewers, at some point someone was going to blow up at Angel. They luckily kept their cool and didn’t get anyone ejected earlier.

Everyone Knows Angel Is Bad

This is the craziest thing about this. Most baseball fans know how bad Hernandez is. He always is highlighted as the worst umpire every year. It’s like he does it on purpose. Or to get ratings during prime time games. Almost as if he has direct instructions from Commissioner Rob Manfred to be the distraction and bad guy so the heat is off of him.

Folks took to Twitter all night and agreed after watching the Sunday Night Game.

The baseball world reacted on social after Kyle Schwarber was rung up in a close game in the 9th by Ángel Hernández on what appeared to be ball 4. pic.twitter.com/xWXrIUhhg4

Something Needs To Be Done, But Nothing Will

The biggest issue and frustration of this is that nothing will be done. Baseball never comes down on umpires, even when it is this obvious.

Hernandez actually lost a discrimination lawsuit last year. He claimed that it was racially motivated that he hadn’t been an umpire for a World Series since 2005. He’s lucky he still has a job. It takes years of working as an umpire and working the minor leagues to finally make it to the MLB level. And lots of good umpires never make it because of various reasons, including bad umpires never being removed like Hernandez. 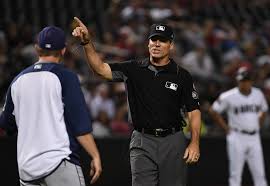 And as a fan, you are supposed to be able to express your concerns to MLB about this. They have an official Twitter account for umpires and umpiring at account @MLBUA. Here’s the problem. If you mention them or say anything negative about an umpire or game, they block you. Yup, the account that is supposed to keep track of bad umpires and hold them accountable like @UmpScorecards does. Instead, they block anyone who disagrees with them and nothing is ever done or changed.

The Milwaukee Brewers never get showcased on Sunday Night Baseball. And then when they finally do, Angel Hernandez makes about himself instead of the great game we were supposed to have.

Angel Hernandez before every game: pic.twitter.com/qQhHhqyvBE

And it overshadows a great game. I mean, it was still a great game with a great viral moment. But it should have been about how well starting pitchers Eric Lauer and Aaron Nola did. It was a close game. It’s just that there were so many extra unnecessary strike outs and batters afraid not to swing. It could have been even better.

Sadly, the current labor deal between the MLB and umpires’ union will prevent any real changes. Based on the metrics used to grade them, they still barely are dismissed or even disciplined. Angel Hernandez will continue to earn almost half a million dollars every year until something is finally done.

Something needs to change with Hernandez. Unfortunately, everyone will probably forget in a week. After MLB says nothing, we all will shake our heads and be forced to move on. And that isn’t right or fair for baseball.

There are 26,000 reasons to remove Angel Hernandez.

Ángel Hernández has missed over 2,600 balls and strikes calls in the last seven years and oh how I wish I was kidding. https://t.co/vyF86ULGTQ