Last night, Adrian Houser threw the first complete game shutout for the Milwaukee Brewers since 2014. It was an astonishing performance. However, many would not have predicted that Houser would be the one to throw the team’s first shutout in seven years. After all, the Brewers have three bonified aces in their starting rotation who have been rewriting both the Brewers’ and Major League Baseball record book all season long. Here, we take a look at ten of the historical achievements this Brewers pitching staff has accomplished. 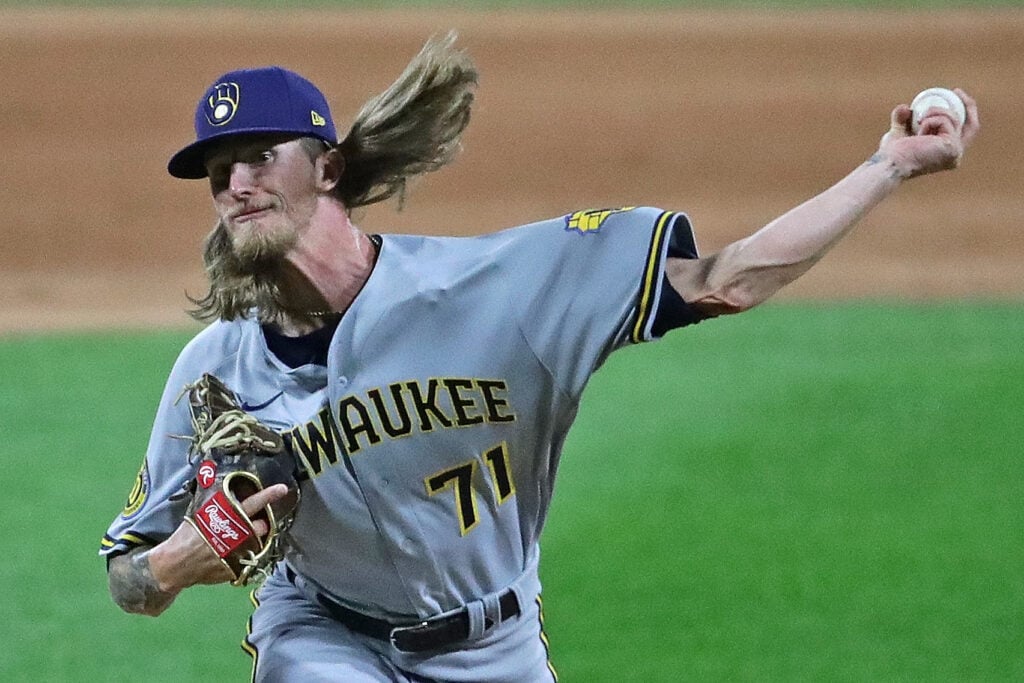 Most of the history that has been made and/or rewritten by Brewers’ pitchers this year has been done so by a starter. However, Josh Hader kicks off our list with his May 8th appearance against the Miami Marlins. Not only did the Brewers win 6-2, but Hader notched his 400th career strikeout in that game. He accomplished the feat faster than any player in Major League history. The previous record had been held by Craig Kimbrel who did it in 236.0 innings. Hader accomplished it in 234.2.

On July 29, the Brewers beat the Pittsburgh Pirates 12-0. Freddy Peralta made history that night with a final pitching line of six innings pitched, two hits, zero runs, and six strikeouts. What made this performance historical is that Peralta passed Nolan Ryan for most starts in a season allowing two or less runs.

The Brewers still have another month left in their season, and Peralta could continue to put distance between himself and a Hall of Fame pitcher.

More history from Freddy Peralta. The Brewers’ hurler had a string of 10-straight starts with seven strikeouts earlier this year. He became the first Brewers’ pitcher to do so.

The Major League record for consecutive starts with at least seven strikeouts is 15. In his next start, Fastball Freddy extended his streak to 11 with nine strikeouts against the Diamondbacks. Peralta’s streak was snapped when he recorded just six strikeouts in a rain-shortened appearance against the Reds.

Despite being snubbed for the All-Star Game at first, Peralta was named as Brandon Woodruff’s replacement. He ended up pitching in relief, and struck out the side on 12 pitches.

Peralta is the first Brewers’ pitcher to strikeout the side in an All-Star Game.

The Milwaukee Brewers have had some great pitchers throughout their history. However, Brandon Woodruff has done something none of them have even come close to accomplishing. So far in his career, Woody has five starts in which he has gone at least seven scoreless innings, given up three or less hits, and struck out at least eight batters.

What is even more impressive about this feat is that three of his five starts with this stat line have occurred this season. Jimmy Nelson, Teddy Higuera, and Freddy Peralta each have three starts of this nature in their entire careers.

Early in the season, it sounded like Corbin Burnes was making some kind of history every time he took the mound. Perhaps his best-known historical feat came after he recorded his 57th strikeout of the season. It was the most strikeouts to start a season without allowing a walk in Major League history.

Of course, the record was broken again a few days later by Yankees’ ace Gerrit Cole. However, it was an historic run for Burnes nonetheless.

On August 11 of this season, Corbin Burnes struck out 10 consecutive batters against the Chicago Cubs. That performance tied the Major League record for most consecutive strikeouts in a single game. Only Aaron Nola (2021) and Tom Seaver (1970) had done it previously.

Middle relievers do not always get the attention that they deserve. However, earlier this season, we wrote about an amazing accomplishment of Brewers’ rookie reliever Jake Cousins. On August 14, in a rather forgettable 14-4 loss to the Pirates, Cousins pitched 0.2 of scoreless relief. That appearance was his 16th straight outing in which he did not allow a single run.

How rare is it for a pitcher to start their career with 16 consecutive scoreless appearances? Cousins was just the 10th player ever to do it. He did not allow a run until his 19th appearance. In all, Cousins has allowed just two runs in 24 appearances.

The game in which Corbin Burnes recorded 10 straight strikeouts has already been noted. However, that was not the only historical thing Burnes did that night. Burnes finished his night with zero runs allowed, 15 strikeouts, and 99 pitches. The list of pitchers to rack up 15 strikeouts while allowing no runs on less than 100 pitches: Corbin Burnes. That’s it. He is the only player ever to do it.

#10- The Brewers Sent Four Pitchers to the All-Star Game